Over the last couple of days, I’ve caught up on a couple of programmes that documented the first 24 hours of the D. Day landings:  24 critical hours that eventually lead to the opening of a second front and ultimately, success. It was to use a quotation from another war “A close run thing.”

Dwight D Eisenhower had prepared a note explaining that the invasion had been unsuccessful, and the allies were withdrawing from the Normandy Beaches. It wasn’t needed. 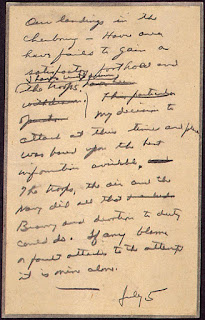 The invasion was a success, and the beach head was secured: a necessary and high-risk strategy had paid off, a triumph of human endeavour, bravery and logistics on a breath-taking scale but of course, not everything worked.

Some Commanding Officers were killed or seriously wounded, and it was suggested that the units under their command broadly did one of two things: they either held their ground or advanced and those that advanced did so under the leadership of someone from the lower ranks who assumed a leadership role. No elections, no debate: this was the very heat of battle. Their adaptability, bravery and determination to accomplish the task in hand came, I suggest, from a deep reservoir of personal qualities that were seen recognised and accepted by others. Their “on the day (s)” contribution led to the Allies ability to grow from beach-head to bridge head and ultimately to victory just under a year later.

Do we in our leadership role recognise our team-members who would in our sudden and unplanned absence, instantly take on the courageous challenges of leadership, securing the permissions and support of other team members when so doing: no debate right now, we’ve got a job to do!

We do something trite and banal when we compare and contrast the bloodless challenges of our 21st Century lives with the war-time savagery experienced by those under live fire or about to be. But we equally fail ourselves if in our leadership roles, we fail to ask ourselves how and by whom we would be replaced at short notice. So, who are your natural choices and where do they currently sit within formal and informal hierarchies and, are they ready?