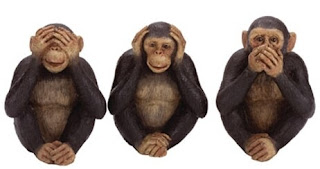 So, who remembers this image? I can't remember not knowing it and its "see no evil, hear no evil, speak no evil," axiom.
On reflection, my life might had been a lot easier if I'd have applied it a little more often: however that's another article!

Across all media platforms it seems that it increasingly okay to attack the person instead of engaging in discussion about their idea(s) and that this is a legitimate way of dealing with dissent and difference. It isn't and it's dangerous.
It's dangerous because on a large political scale the personal attack becomes an integral part of a crazed pantomime. One in which an opposing narrative is a mere vehicle to deliver its author to a mocking tirade of cheap insults and lies to entertain one side whilst destroying the credibility of the other. "Say it long enough and loud enough and they'll believe anything!"
On a personal level, in our relationships and in the workplace, there are those who would rather keep silent about their best ideas than subject themselves to
Please note, the above "Infamous Five", is neither exhaustive nor prescriptive, feel free to expand! My point is that is you seek to take away someone's voice you have effectively broken them, so don't expect too much from them.

So, what would he know?

Logician and philosopher Bertrand Russell had a few ideas about thinking, I guess it goes with the job. His view of our progress (sic) was informed by the movements between the forces of tyranny and anarchy and the importance of questioning assumptions and beliefs.
In 1951, he set out the following "Ten Commandments". At that point in our history the world was in the emergent grip of opposing forces; powerful Eastern and Western blocs, each increasingly capable of inflicting terrible damage on the other. We have made little if any progress.

They seem to sit comfortably across our work based, social and personal relationships and in so doing they carry risk. We maybe too often accept transient, comfortable capitulation by choosing to shy away from challenge because however good our intentions might be, our perceived will be frowned upon.
Much of our work is about creating thinking, discussion and dialogue: it takes place with work-place teams and individuals at a variety of positions within the organisation. I'm very tempted to produce Russell's Ten Commandments at one of our events with the question "So, how are we doing with these?"
.....I'll let you know how I get on! 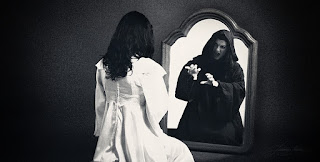 I met up with a colleague for coffee. It was a “getting to know you better”’ meeting that is part of building quality relationships with people. I want to mention here and before I go on that this is a key part of developing powerful relationships. If you meet people with the sole intention of “selling at them” you need to prepare yourself for a lonely existence!

Now, my colleague is successful; he has developed and grown a business and is liked, trusted and sought after. Half way down my first Americano, he told me that he worried (and I mean ‘keep you awake at night’ worried) about being found out, wanting.

We talked a little longer and by Americano no.2 we’d established the reality of his situation – that things are positive, healthy and vibrant for him. Having come to this conclusion it felt only right to acquaint my partner in caffeine with what is called the Impostor Syndrome.

In the broadest of terms, Impostor Syndrome is a feeling of:

…I am sure you get the picture!

We talked our way through another high quality coffee and agreed the following plan:

He’d reflect on things
He’d share his thoughts with someone close to him
In this conversation he would be honest, open, candid
We’d meet again and if necessary put some actions in place
Next time, he buys the coffee!

After doing exactly that, the result was a relaxed, future focused and positive client! Great news for him and his family.

For me, I have the satisfaction of shifting a self-limiting belief, helping to free up some thinking as well as knowing that the only thing that might keep my colleague awake now is a coffee induced insomnia.


If you recognise the Impostor Syndrome within yourself or someone you know and want to have a chat about this or are interested in any other aspect of our work them please get in touch on 07984 409937 or email us at jpd@dy3solutions.mygbiz.com.
Posted by John Dooner at 12:47 No comments: 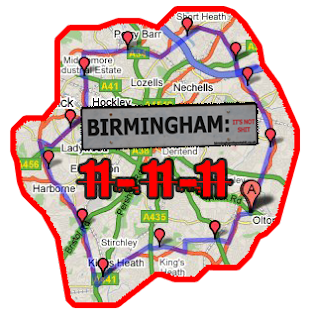